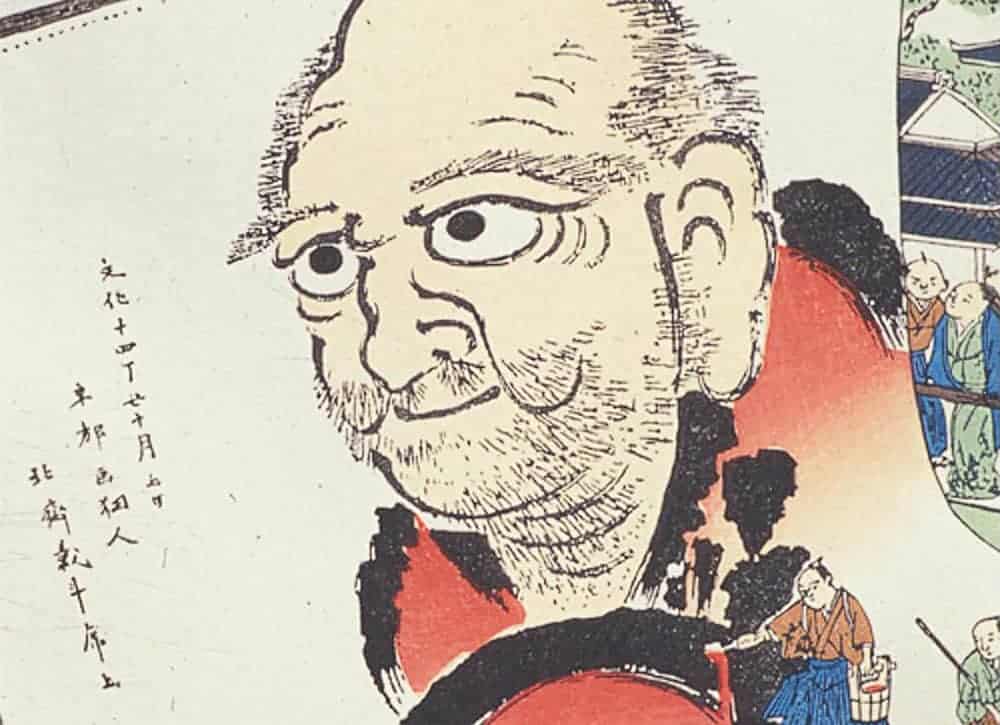 Until the age of 70, nothing I drew was worthy of notice.

#onthisday in 1849, aged 88, the artist Katsushika Hokusai (葛飾 北斎) died. He was not only one of the most important artists of the Edo period in Japan, but one of the first Japanese artists to achieve fame abroad. It is hard to talk about Hokusai without mentioning his Thirty-six Views of Mount Fuji series, of which perhaps the most famous are his Great Wave and Fine Wind, Clear Morning pieces.

The Old Man Mad About Art

Yet I find his later works, created after he began working under the name Gakyō Rōjin (画狂老人: “The Old Man Mad About Art”), I think the true brilliance and importance of the man is revealed. Hokusai seemed to think as much himself, observing that it was in his later years his true talent bodied forth:

From the age of six, I had a passion for copying the form of things and since the age of fifty I have published many drawings, yet of all I drew by my seventieth year there is nothing worth taking into account. At seventy-three years I partly understood the structure of animals, birds, insects and fishes, and the life of grasses and plants. And so, at eighty-six I shall progress further; at ninety I shall even further penetrate their secret meaning, and by one hundred I shall perhaps truly have reached the level of the marvellous and divine. When I am one hundred and ten, each dot, each line will possess a life of its own.

During his old age, he produced his memorable Fuji from Goten-Yama. It is not only one of the most detailed scenes of his entire Fuji series, but a work which speaks to the popularity of the prevailing Fuji cult by depicting the great mountain as a spec in the distance. Both focal point and vanishing point, the composition pulls us into the work with a hypnotic beauty which comes from the confidence of a master artist unafraid to hold the audience in the palm of his hand.

What I find most compelling, is the way in which Hokusai’s work burgeoned as his years advanced. Perhaps this is a an unconscious reaction to feeling that I am yet to realise my potential. Perhaps this is a nod to my mother, who on this day I remember as a woman of strength and passion and who also didn’t come into her own until later in life. Whatever the cause, I do know that on this mother’s day I recall the life of a woman who not only touched my life, but that of countless others through her generosity, calm intellect and capacity to put the cults of her day into their proper perspective.

A lesson for us all. Never be afraid of blooming late in life.

Hokusai painting the Great Daruma by Katsushika Hokusai is licensed under Public Domain.

The Great Wave off Kanagawa by Katsushika Hokusai is licensed under Public Domain.

Fuji From Goten Yama by Katsushika Hokusai is licensed under Public Domain.

This post is day 008 of my #100DaysToOffload challenge. If you want to get involved, you can get more info from 100daystooffload.com.

A compelling aspect is the way in which Hokusai's work burgeoned as he aged. An unconscious reaction to feeling we are yet to realise our potential.

A compelling aspect is the way in which Hokusai's work burgeoned as he aged. An unconscious reaction to feeling we are yet to realise our potential.