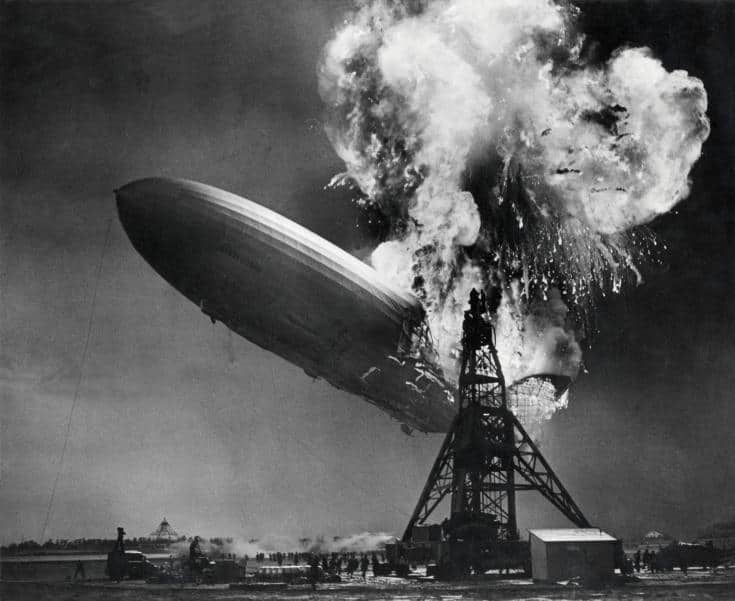 As I stirred the mince, a t-shirt on the television grabbed my attention. ‘6 May 1937’ was superimposed over an airship. Reflexively I recalled Herbert Morrison’s voice crying out with anguish: ‘Oh, the humanity!’ As my conscious thinking caught up, a newsreel flickered into life in my minds eye and I felt myself transported to an airfield in New Jersey as an airship burned.

More often than not, it is a sound or a smell which pulls us from our present to the past. One so consuming, the world as we experience it seems to fade to black. And the past, which comes flooding in, transports us to a moment which is both frozen in time and animated by our thinking. More bizarrely still, a word or a date rekindles the fire of an event we have not witnessed outside our imagination or the footage of a newsreel.

The Sublime and The Beautiful

The two strongest impressions conceived of by the Irish politician and philosopher Edmund Burke (1729-1797), were the Sublime and Beautiful. To modern readers this may seem a pleonasm, as the sublime is commonly taken to mean excellence or beauty. But it was not in this sense Burke used the word. Rather, he was following the Western tradition of aesthetic thought, traced through Plato, Aristotle and Longinus, in which the sublime and the beautiful were primary categories. In this context the sublime represents something great or majestic and imbues us with a sense of awe. However, Burke conceived a theory which went beyond the traditional categorisation. He associated sublimity and beauty with notions of pain and pleasure. When we recall a moment such as the Hindenburg Disaster, do we not feel a sense of awe mingled with pain? Do we not feel a sense of humanity?

But what, you may ask, of a sense of beauty mixed with hope? On that I will write, next….

Hindenburg Disaster by Sam Shere (1905–1982) is licensed under Public Domain.

This post is day 004 of my #100DaysToOffload challenge. If you want to get involved, you can get more info from 100daystooffload.com.

The past, which comes flooding in, transports us to a moment which is both frozen in time and animated by our thinking. 'Oh, the humanity!'

The past, which comes flooding in, transports us to a moment which is both frozen in time and animated by our thinking. 'Oh, the humanity!'