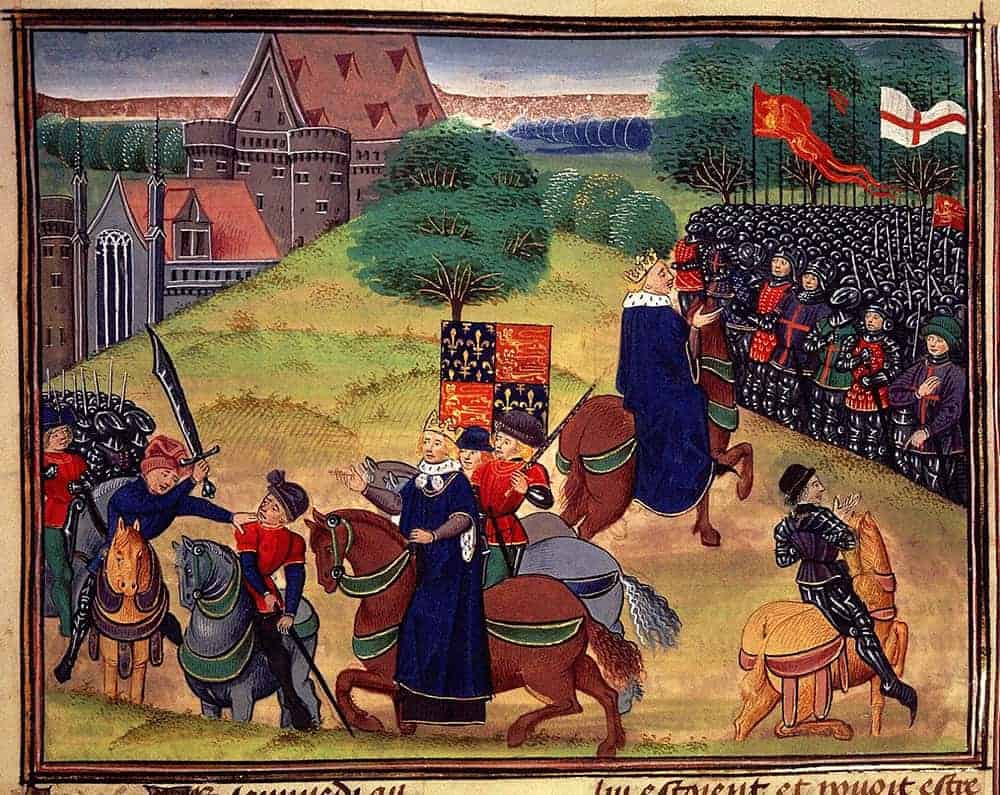 #OnThisDay in 1381, Wat Tyler is beheaded following a skirmish during the Peasants’ Revolt.

But the tale of the revolt begins some months earlier and ultimately had its roots in the socio-economic dislocation which resulted from the Black Death pandemic some forty years before in the 1340s.

Though the proximate causes of the revolt is usually cited as the unpopular poll tax, largely a result of demonstrators co-opting it as an example to hurl at Margaret Thatcher in the 1980s when she introduced similar measures, it was a wide spectrum movement which sought an end to serfdom and the removal of senior officials at court.

Yet perhaps the most surprising feature of the revolt is that in-spite of the modern title, Peasants’ Revolt didn’t gain usage until the late nineteenth century, the people who animated the movement weren’t peasants at all. They were in many respects the village elite. True, they weren’t noble magnates, but they were constables, stewards and jurors. In short, people who were on the up and saw an opportunity to press their agenda.

Since the official burial of Marxism, though reading the popular press today the Zombie seems determined to walk once more, historians aren’t supposed to use the phrase class war. Yet that is essentially what the revolt was: a reaction from village England against what was deemed to be plans to keep them in their former place.

Marching on London, the rebels wrung concessions out of a dazed and momentarily wrong footed government. But once the King had regained himself, and a preponderance of military power, he turned on the rebel camp proclaiming:

You wretches, detestable on land and sea, you who seek equality with lords, are unworthy to live. Give this message to your colleagues. Rustics you were and rustics you are still. You will remain in bondage not as before, but incomparably harsher. For as long as we live, we will strive to suppress you and your misery will be an example in the eyes of posterity.

In the face of such vehemence, the rebels took the only realistic course. They fell to their knees, leaving the king both literally and figuratively the only one left standing.

Yet it would be wrong to describe the revolt as merely a ‘passing episode.’ For although the rebels didn’t achieve the sweeping societal reforms for which they had fought and died, they did nudge the pendulum. In the years following 1381 serfdom went into terminal decline, though it should be noted for economic rather than political reasons, and wages steadily rose.

Much the same could be said for the current protests. Eventually the people will leave the streets and things will largely go back to how they were. But the pendulum has been nudged, and while it won’t result in the mass bulldozing and cancelling of anyone with even the most dim and distant connection with slavery, it will cause society to reexamine its past and look with fresh eyes to its future. Though I would wager it is one driven by economic rather than political imperatives.

Though perhaps the bigger question for history is how far will the pendulum swing in the current direction before moving back the other way? And once it does, how far will it travel?

The Death of Wat Tyler from Library Royal MS 18.E.i-ii f. 175 is licensed under Public Domain.

This post is day 044 of my #100DaysToOffload challenge. If you want to get involved, you can get more info from 100daystooffload.com.

Much the same could be said for the current protests. Eventually the people will leave the streets and things will largely go back to how they were.

Much the same could be said for the current protests. Eventually the people will leave the streets and things will largely go back to how they were.