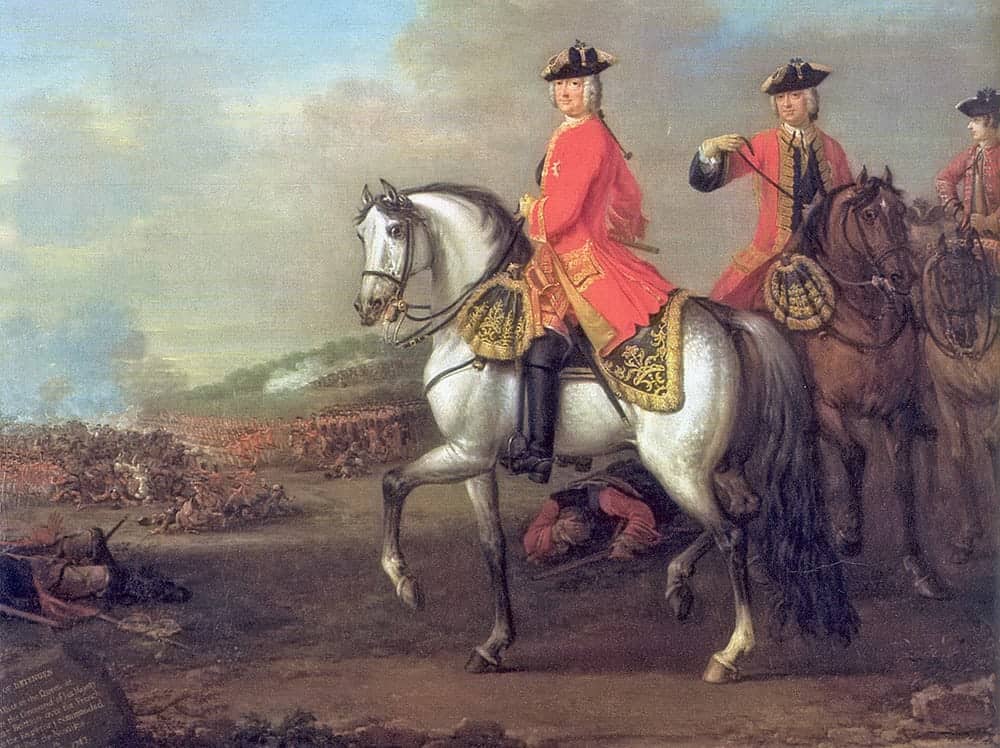 #OnThisDay in 1743, George II led his troops into battle and defeated the French army at Dettingen, Bavaria. It is a singular event in that it was the last time an English monarch led soldiers into battle. This got me to thinking about leadership and how it is a word which means different things in different settings and to different audiences.

Leadership may be shared to bolster employee engagement. Leadership may also be solitary, with an individual taking responsibility for a situation or group. In either case, leadership may be manifest in one of four key perspectives: competency, contingency, transformational, implicit. Countless bottles of ink, or bytes of data in the computer age, have been spilled over these perspectives and there is neither time in the day nor space in this blog to definitively cover them all. But I will give a general pracie which may help to provide a little clarity.

Perhaps the most well known and oft written is the competency perspective. This stems from the seemingly innate human interest in what personal characteristics distinguish a great leader from the ‘ordinary’ person in the street. Over the last two decades, several leadership researchers and consultants have examined what are the defining traits of leaders and they have come up with an interesting list: personality, self-concept, drive, integrity, leadership motivation (will to power), knowledge of the business, IQ, practical intelligence and EQ. The last of these traits is coming to the fore as leaders are increasingly expected to connect with people and issues, rather than merely take them into consideration. In some senses this is Corporate Social Leadership, or the ability to understand and empathise with shared values of stakeholders so they can be more effectively integrated into the business.

The ability to grasp the situation and mould a leadership style to fit the here and now works hand in glove with the contingency perspective of leadership. Effective leaders must be both insightful and flexible. However there is a trap in this type of leadership perspective, unless a person has a very chameleon like nature, or is a very good actor, adopting a style which doesn’t come naturally can leave them open to perceptions of not being authentic. Perhaps the most damming post-modern critique of a personality or style. Though largely consigned to history, it is important to mention one of the earliest contingency models, that of Fred Fiedler. His model looks at a leader’s natural style and analyses if this fits the situation. In terms of recruiting this may, with modifications, have some benefit as leaders could be selected to ensure best organisational fit (here it should be noted Fiedler’s original model was highly simplistic and only contained two leadership styles, to make it more relevant for recruiting a wider scope of the different leadership styles would need to be taken into account). But this also has a dark side, namely, if a leader whose natural style does not fit the organisation, the leader may, albeit subconsciously, try and force changes to ensure the situation now fits their natural style.

The Transformational Leadership Perspective looks at people who are gifted communicators, able to meaningfully convey an appealing vision of their mission. Leaders such as Richard Branson are archetypes of this perspective. While at face value the most effective style, engendering as it does a higher level of employee commitment, it has faced criticism for being susceptible to circular logic. The leader is successful, successful people inspire followers, inspired followers breed enthusiasm for the leader, a leader with enthusiastic followers is successful. Another concern with this perspective stems from the assertion that inspirational leaders may be very situational; in times of flux their vision acts as a guiding light, in times of stability employees have less need to be shown the path.

The final perspective I will deal with is Implicit Leadership. This relates to the perceptions followers hold about the characteristics and influence of their leaders. In terms of developing leadership ability, the implicit perspective is arguably highly important as it addresses the preconceived beliefs followers may hold about their ideal leader. An example of this is the German tendency to prefer imposing leaders, a classic example of which was the former Chancellor Helmut Kohl; who had a tendency to address other world leaders much like a juggernaut talking to a gathering of hedgehogs.

It is here, at the nexus of the four perspectives that we find the true leader. A person whose authentic character, created from the delicate interplay of the competencies of effective leaders, capitalises on the situation at hand to act in a transformational capacity, lifting a person’s performance to higher standards. But it is also here that we need to pause and remember that while a leader may lift a person’s vision and even raise their performance, it is folly to adopt the ‘great man’ reading of events. Perhaps Tolstoy went a little far in asserting leaders were merely slaves realising the decree of Providence, but he was right in seeing the importance of the situation. Modern leadership theories all encompass this notion, in one form or another, and it is why discussion of more than one is crucial for our understanding of how leadership can be a transformative force. But what sort of a transformation will be wrought?

Plato, in The Republic, wrote of cardinal virtues and their importance in the character of a good city. It is tempting to pick up this theme in regards to leadership and argue that there are four virtues for a good leader: prudence, courage, temperance, justice. Armed with these, a leader can go beyond being merely transactional, building personalities around them beyond their normal limitations, capable of crossing organisational divides to address notions of shared corporate social values and responsibilities.

King George II at the Battle of Dettingen by John Wootton is liscensed under Public Domain.

This post is day 056 of my #100DaysToOffload challenge. If you want to get involved, you can get more info from 100daystooffload.com.

Plato wrote of cardinal virtues and their importance in the character of a good city. It is tempting to pickup this theme in regards to leadership.

Plato wrote of cardinal virtues and their importance in the character of a good city. It is tempting to pickup this theme in regards to leadership.