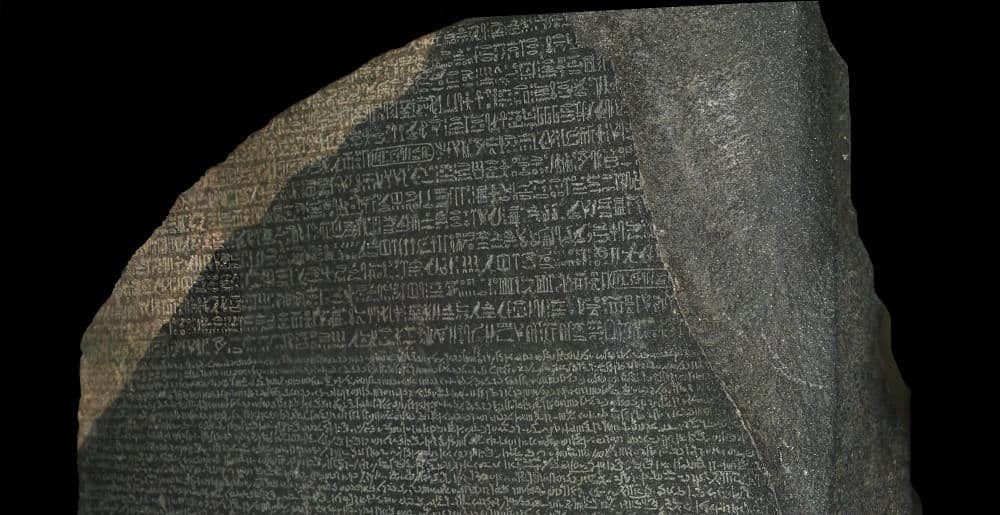 #onthisday in 1799, the Rosetta Stone was discovered by French soldier Pierre-François Xavier Bouchard during the Napoleonic campaign in Egypt. It is one of the most important artefacts pertaining to ancient Egypt as it was the key to deciphering hieroglyphs, which has helped humanity unlock lost ancient knowledge.

The stone was created in 196 B.C.E. and has three inscriptions of the same decree, which affirmed the royal cult of the 13-year-old king Ptolemy V on the first anniversary of his coronation. The first inscription is in hieroglyphs (the formal script for priestly decrees), the second is in Demotic (the native script used for daily life) and the third is in Greek (the language of administration).

Yet Rosetta has come to symbolise the original stele. It has become an idiom for the notion of a keystone to hidden knowledge. H. G. Wells encapsulated much of this genre in his 1933 novel The Shape of Things to Come.

This material was just for his own use. It is a mixture of very cursive (and inaccurate) shorthand, and for proper names and so forth, longhand. Punctuation is indicated by gaps, and often a single word stands for a whole sentence and even a paragraph. About a third of the shorthand stuff was already represented by longhand or typescript copy in the folders. That was my Rosetta Stone. If it were not for the indications conveyed by that I do not think it would have been possible to decipher any of the remainder. As it is, I found it impossible to make a flowing narrative, altogether of a piece with the opening and closing parts of this history.

Yet the more striking feature of Wells’ book is the prescient way in which he prefigured ‘cancel culture,’ putting its core philosophy into the mouth of his fictional social scientist Gustave De Windt:

It is no good asking people what they want… That is the error of democracy. You have first to think out what they ought to want if society is to be saved. Then you have to tell them what they want and see that they get it…About most affairs there can be no two respectable and antagonistic opinions… It is nonsense to pretend there can be. There is one sole right way and there are endless wrong ways of doing things. A government is trying to go the right way or it is criminal.

Yet as J. K. Rowling observed through her own fictional character, Albus Dumbledore, in the Prisoner of Azkaban:

Happiness can be found, even in the darkest of times, if one only remembers to turn on the light.

Rosetta Stone by Hans Hillewaert is licensed under CC BY-SA 4.0

This post is day 074 of my #100DaysToOffload challenge. If you want to get involved, you can get more info from 100daystooffload.com.

A striking feature of Wells' book is the way in which he prefigured 'cancel culture' in the thinking of his fictional social scientist.

A striking feature of Wells' book is the way in which he prefigured 'cancel culture' in the thinking of his fictional social scientist.